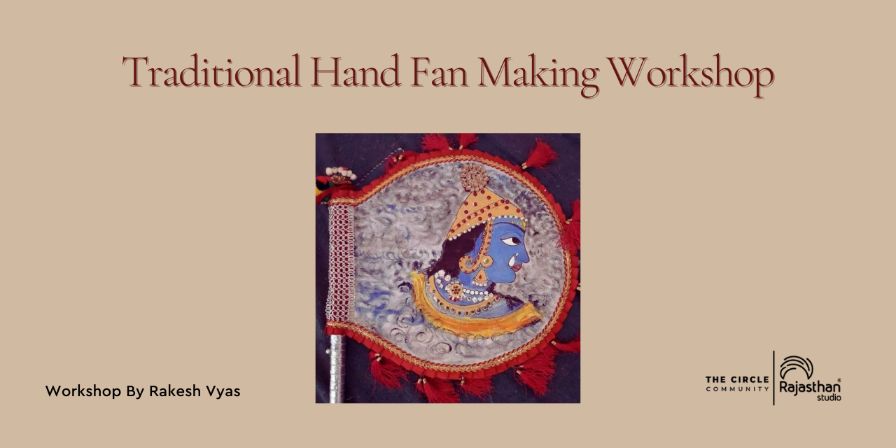 The History of Indian fans goes back to ancient times for being used in temples in order to fan the deities and also used in royal courts and households. There is a mention of hand fans in the Mahabharta. Indian fans have many varieties the fans are decorated with beads, silk, and satin and some have paintings, prints, miniatures and patterns. The fans used in the Mughal era were called Phad which were antique ceiling fans and were pulled by Pankhawala. Rooftop together a Traditional Hand Painting fan Workshop with Rakesh Vyas.

Akash Vyas greeted all the participants and thanked the host for the lovely introduction. He first started talking about the history of the Hand fans and started sketching Lord Krishna on a white paper canvas. He continued painting the sketch of Lord Krishna with Light and dark blue. Also painting a tinge of light blue in the background and the mukut in light yellow. The hair is black in colour in Sketch. Rakesh showed all his beautiful and colourful hand fans to all the participants. He concluded the Hand Fan making by decorating the Phad which were antique ceiling fans and were pulled by Pankhawala. Rooftop together a Traditional Hand Fan-making with a red decorative ribbon.

Rakeshji created a beautifully artistic and colourful hand fan as it looked artistic and aesthetically pleasing. The hand fan royal. All the participants appreciated Rakesh’s Traditional Hand fan Painting and showed their co-created castle hand fan to all the participants. The host not only thanked Rakesh for teaching Hand Fan making but also teaching about something traditional hand fans have been part of our Indian culture. The attendees were from different parts of the country. They also belonged to different age groups but their love for art brought them together on a single platform. Rooftop, as always, was successful in connecting artists and curating a magical and positive vibe together. On this note, here’s us signing off until next time!

Still inquisitive about art? Join us on Instagram @rooftop_app for all the latest updates and download Rooftop app available for both iOS and Android devices