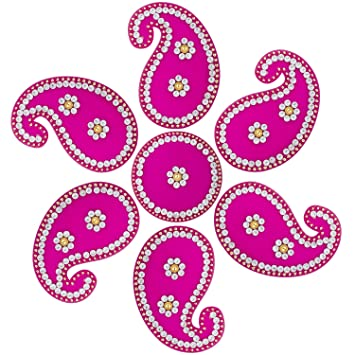 Pantone Colour of the Year 2023 and Indian Art

Pantone’s color of the year is Viva magenta, but how well it is represented in Indian art forms?

Pantone has just revealed Viva Magenta as the colour of the year for 2023! But did you know that this vibrant hue can also be found in traditional Indian folk art?- Brace yourself for a burst of boldness in the world of design – P

In India, magenta is a colour that is often associated with different religions and traditions reflecting the rich diversity of the country.

Pantone colour of the year 2023 and Indian art forms

As the Pantone Colour of the Year, Viva Magenta is expected to be a major trend in fashion, design, and art in the coming year. In India, this bold fuchsia can be seen in traditional art forms such as Rangoli, a popular form of floor art that is created using coloured powders, sand, and flowers.

Rangoli is traditionally created during festivals and special occasions as a way to bring good luck and prosperity. It is typically made up of intricate, geometric patterns and symbols, and is often adorned with flowers and other decorations. The use of Viva Magenta in rangoli designs adds an extra burst of energy and liveliness to these already vibrant works of art.

In addition to Rangoli, the Viva Magenta colour can also be seen in other Indian art forms such as mehendi designs or henna body art. It is a popular form of temporary tattooing that uses a paste made from the henna plant. The shade of Viva Magenta is the perfect choice for these intricate and detailed designs, adding a touch of modernity to this traditional art form.

A specific art form that showcases the use of magenta is the Madhubani style of painting, which originated in the Madhubani district of Bihar. This style is characterized by intricate patent and textures coupled with bright colours. Magenta is often seen to be used to depict flowers and other decorative elements. The paintings are typically created using natural pigments made from crushed flowers, vegetables, and minerals, and depict scenes from Hindu mythology and everyday life in the village.

Madhubani paintings are not only beautiful works of art, but they also hold a deep cultural significance. In the past, they were created on the walls of homes as a form of spiritual protection, and today they are often given as gifts during special occasions such as weddings and religious festivals.

Kalamkari and Pantone Color of the Year

Another art form that incorporates magenta is the Kalamkari style of hand-painted fabrics. This traditional art form, which originated in Andhra Pradesh, involves the use of natural dyes. It involves intricate detailing in order to create beautiful designs. The word “kalamkari” literally means “pen work,” as the designs are created using a pen-like tool called a “kalam.” The fabrics are typically made from cotton or silk and feature intricate patterns inspired by Hindu mythology and nature. Magenta is a prominent colour in Kalamkari fabrics and is often used to create stunning floral patterns.

Kalamkari fabrics are not only used to create clothing, but also home furnishings such as bedspreads, curtains, and cushion covers. They are highly prized for their intricate detailing and use of natural dyes. They are often passed down through generations as heirlooms.

Rajput miniature paintings are characterized by their intricate, detailed designs and vibrant colours. They often depict scenes from Hindu mythology, as well as everyday life and nature. The use of Viva Magenta in Rajasthani paintings bring even more energy and liveliness to these already vibrant works of art!

In addition to Rajput paintings, the Viva Magenta colour can also be seen in other Indian paintings such as Mughal paintings. It is a style of miniature painting that originated during the Mughal Empire in India. These paintings are known for their use of bright, bold colours and intricate details. The Viva Magenta hue adds even more vibrancy to the art form.

In conclusion, the Pantone Colour of the Year 2023, Viva Magenta, is a bold and vibrant hue that is sure to bring energy and positivity to any space. Its versatility and cultural significance make it a perfect choice for all types of art. Including traditional Indian paintings such as Rajasthani, Rajput and Mughal paintings.

So, the next time you see the colour Viva Magenta, think of the rich cultural history and traditions it represents in Indian folk art. Whether you’re using it in your design work or simply incorporating it into your wardrobe. This vibrant hue is sure to bring a touch of traditional Indian beauty to your life.

Are you inspired by the culture of the use of magenta in Indian folk art? Share your thoughts in the comments below!

Rooftop is India’s leading online learning platform for live art workshops and professionally curated art courses. Such mindfully selected classes help bridge the gap between artists and art lovers to make art easily accessible and approachable to all those who seek it. Art experiences are carefully designed to fit your work life, so you can attend classes on the go, any time, anywhere.

We offer a wide range of courses starting from Live art workshops. Rooftop is a place where passionate and skilled artists give voice and purpose to their art. From Maestro Courses and Art Therapies, Rooftop has it all. An app that not only offers creative services but connects art enthusiasts to form an exclusive art community like never seen before.

Pantone Color of the Year 2023 is Viva Magenta