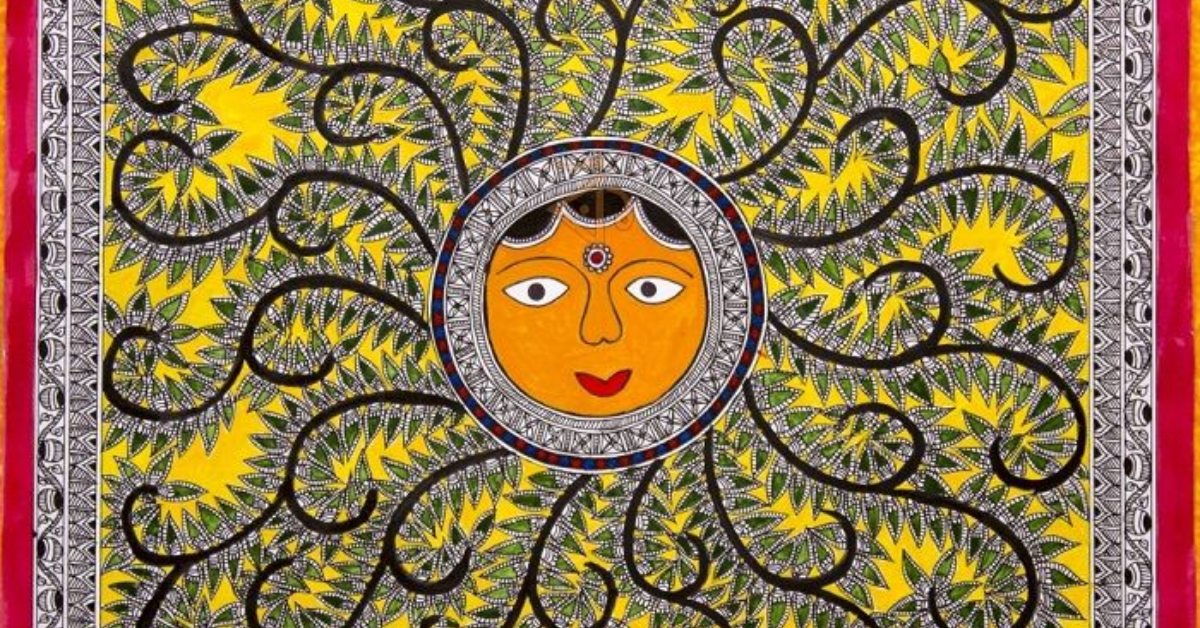 Madhubani Painting: Bihar On The Front

Madhubani art originates in Mithila, the ancient city where Sita, King Janak’s daughter, was born. The king is claimed to have commissioned a Mithila painting to mark his daughter’s marriage to Lord Rama of Ayodhya. Today, Madhubani paintings thrive as a household art form based on social norms and rituals.

A British colonial official of the Madhubani district, William G. Archer, discovered the Madhubani painting tradition during an earthquake in Bihar in 1934. He came across these artworks on the interiors of the residences of the villagers by chance. He then kept a collection of higher-quality Madhubani paintings with a broad range of themes.

Philosophically, Madhubani painting is a tradition that thrives based on principles of dualisms, this principle uses opposites like day and night or sun and moon, etc. The publications, photographs, and educational films by E. Moser Schmitt give us a first-hand account of themes, techniques, and social backgrounds. They depict a complete cosmos, complete with deities, the sun and moon, flora and wildlife, and so forth. Buddhism, tantric symbolism, Islamic Sufism, and classical Hinduism are all found in this diverse art form.

There are five distinct styles of Madhubani painting:

Bharni – The Bharni style of painting is one of the five Madhubani painting styles. Bharni paintings are usually depictions of Hindu gods and goddesses in the art.

Kachni – Katchni painting style is a classic style originating from the Kayastha community. From the little settlement of Ranti village in Madhubani District, the Kachin painting style has come a long way. This line of the paintings primarily showcases the difference in form. Animals, flowers, and other natural elements are frequently in feature in these paintings.

Tantrik– The Mithila or Madhubani Tantrik style of painting is a highly distinctive form of painting. Traditional Hindu mythical characters are featuring in these paintings, and the Hindu audience holds a great belief in them. People in India usually hang these paintings in their homes or use them for special occasions such as prayers.

Godna– In the Mithila art style race, Godna is one of the easiest approaches. Chanu Devi is the one who discovered the Godna Madhubani artwork, which she created with a bamboo pen and kajal.

Kohbar– Kohbar is one of the most popular Mithila art styles in Madhubani painting. When it comes to Madhubani art, the word ‘kohbar’ is highly dignified because it is in association with an important Hindu wedding ritual.

Until the 1970s, the art form was mostly in disregard. The entrance of art dealers and national prominence created new sources of revenue for the locals. Although, this Bihar Painting artform was traditionally restricted to being created only by Brahmin and Kayastha women. Further investigation indicated that Madhubani paintings were also found as decoration of the walls of Harijan women’s cottages. Their paintings, however, differ in terms of style and topic.

The brahmin women chose to use free composition with vivid colors, but the Kayastha women prefer line painting and enclosing certain scenes. These previously distinct styles have now fused to a large extent. Furthermore, due to the increased demand for this art style, artists have begun to paint on canvases, paper, and other things instead of just on walls.

The Madhubani painting tradition was one of the Indian Paintings that was instrumental in conservation efforts in India in 2012 when the state of Bihar saw widespread deforestation. The effort were by Shashthi Nath Jha, who runs the Gram Vikas Parishad, an NGO, as a way to safeguard local trees that were cut down in the name of developing roads and development. The trees were traditionally in decoration with gods and other religious and spiritual figures such as Radha-Krishna, Rama-Sita, scenes from the Ramayana and Mahabharata, and other legends.

Some women, such as Ganga Devi of Chiri village, Jagdamba Devi of Ranthi village, Sita Devi, and Yamuna Devi of Jitwarpur village, have earned a name and recognition for themselves over time.