The Peacock as a motif has been used in art since ancient times. It is one of the oldest symbols of royalty and power. The bird was originally from India, where it was considered to be a symbol of good fortune and royalty. The Peacock has become a popular motif in Western culture over time, and it can be seen in architecture, clothing, furniture, and art. In its natural habitat, the Peacock is a bird of strength and power; its feathers symbolize royalty and power. The Peacock has been used in Indian art to portray wealth or luxury items such as clothing or jewellery. You can also find the motif in religious art, such as India’s Hinduism, which represents immortality and resurrection from death.

Peacock motifs have several definitions in every painting, which is why Rooftop is here to illustrate the significance of the peacock motif in Indian art and culture.

The Birth Of The Motif:

The Peacock has been illustrated in art since ancient times and is seen as a symbol of beauty, wealth, and sinful pride. The motif originated in India over 4,000 years ago; earlier, it was the symbol of royalty, and from the 1800s, it began to populate Western visual and decorative culture. However, the oldest known depiction of a peacock was found in an Egyptian tomb dated back to 3150 BCE. This ancient artwork shows what appears to be a large bird with its wings spread apart.

The Peacock as a motif symbolizes immortality since, according to ancient mythology, people believed that the Peacock’s flesh did not decay after fatality. The Peacock motif has played an essential role in defining cultures across several countries like India, Far East Asia, Ancient Persia, Greece, and Rome.

A peacock symbolizes celestial love, knowledge, romance, and prosperity in Madhubani paintings. As one of the richest portrayals of Indian art and culture, Madhubani paintings are dominated by bright, poppy shades depicting ancient Indian culture.

In Kalamkari paintings, the peacock as a motif is responsible for spreading the message of peace, passion, prosperity, and harmony. Kalamkari is a handprinted art enriched with natural dyes depicting the iconic events from Ramayana and Mahabharata.

Mandala art is one of the popular modern art that most home-decor bloggers admire. Further, this art form focuses mainly on peacock feathers and tries to portray the idea of freedom. Peacock motifs symbolise the endless cycle of life and the divine beauty of a free spirit.

In Gond paintings, the peacock motif is used to signify the harmony that nature provides us. Especially dots, fine lines, and fish scales are some of the primary features of these paintings.

Many designers have used the peacock as a motif to design their products. It is seen on many objects like tablecloths, teapots etc. It is a trendy design that is used for more than 200 years now. In the mid-20th century, a new trend in America’s art and fashion emerged; peacock motifs became the representative of  Indian arts and crafts. The Peacock motif is a well-recognized image worldwide and has played an essential role in fashion in European countries. Since the late 19th and 20th centuries, America and Europe have shown immense interest in Indian arts and crafts. The Peacock motif has been used to give a cultural and vintage appeal to Chinaware, Table cloths, Curtains, and engravings.

What’s In It For Future

Furthermore, since peacocks have such beautiful plumage, they are also seen as symbols of wealth. This is because they can produce such high-quality feathers all year round thanks to their diet, which consists mainly of colourful insects like butterflies and moths. One of the optimistic sides of modern Indian Art is that people are again ready to go back to ancient times and discover more about the traditional Indian culture. This peacock art is not only limited to sarees but also embedded in jewellery, furniture, showpieces, and even interior walls. For its high level of allure and sophistication, peacock style, feathers, and even the colour palette is getting admiration worldwide.

Rooftop is here with an array of exciting art and culture workshops to help uplift your mental health and contribute to blossoming your creative mind.

For more art-related content, join our Insta family @rooftop_app or download our app on both Android and iOS devices. 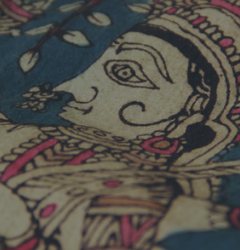 Not So Complex Indian Art Forms But Seem To Be!