Patriotism is a combination of love, devotion, and a sense of attachment to one’s country. Apart from the soldiers who martyr for their country marching on the front, some people kept the Indian heritage preserved in various ways showing their love for the country in the best way possible. On this Independence Day find out some breathtaking Indian Paintings on Independence.

Where there are feelings, how can art be in the backseat being itself the medium of expressing emotions? Many great painters showed their love and dedication through their artwork. Their works also play an important role in depicting the actual ambience reaching the depth of our culture, about the people and everything. These Indian paintings are on independence and history and many hidden aspects of the past. Rooftop brings you 5 such incredible paintings of Indian history and heritage.

Dating back to 1905 and made by Abanindranath Tagore. This painting depicts a saffron-clad woman, dressed like a sadhvi, holding a book, sheaves of paddy, a piece of white cloth and a garland in her four hands. The painting is considered significant because it helped in conceptualising the idea of Bharat Mata (Mother India). This iconic image of Mother India was reprinted in thousands of protesters’ posters and banners. This was across Bengal to invoke a sentiment of national fervour. It was put on display at the Victoria Memorial Hall in Kolkata, India in 2016.

Artist Mahesh Pal Gobra ignited the thought of respecting women as in India we rank women equal to Goddesses. We treat India as our Motherland and refer to it as Bharatmata. The thought of respecting women is something that must be ingrained in every child while bringing it up. While we claim it to be an integral part of our culture. This is something that really needs attention and is yet to be worked upon. It’s the basic mindset that needs to evolve. Though things are better than before, we still have a long way to go.

A Sketch From The ‘Famine’ Series

Influenced by the Great Famine of Bengal in 1943, Zainul Abedin discovered his most characteristic artwork. Showcasing inhumane actual scenarios of the famine, Abedin sketched people in skeletal forms, lying by the roadside in dire situations. These artworks became references to human suffering and turmoil. The artist used ordinary packing paper to accentuate the theme of the paintings further. Adebin thought of this way to spread awareness about the situation of the working class in India.

This colourful artwork by Mithun Dutta is an artistic depiction of another very ancient and important art form of India, Kathakali. It is the traditional dance form of India with its origin in the southern state of India, Kerela. Kathakali is the official dance form among the eight Sangeet Natak Academi. This story plays a form of dance that involves colours, makeup and enormous costumes and accessories that the performer wears.

Tiller Of The Soil

This painting depicts the pavilion site of the Congress Session, Haripura in 1938. Painted with the combination of rhythmic lines by Nandalal Bose, tempera and the wash technique of watercolours on paper. The painting depicts an Indian farmer tilling the field in a traditional method. A grey arch frames the painting, and illusions the onlooker as if the scene is being viewed through a jharokha.

Getting to know more about your ancestors, celebrating family traditions, embracing your culture, and understanding where you came from make you realize how beautiful and unique you are. It can also give your sense of self-worth and belonging a boost, giving you a sense of identity. So, come one more step closer to revealing your true identity through an incredible medium of self-expression, art! 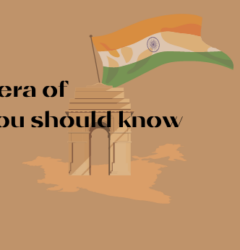 5 Artists From The Era Of The Great Independence